In a series of articles we have written about changing the plant life according to the information of Galiya Kerey, the bio-energy specialist from Almaty. In particular, in the article «Eden in Almaty» (19/09/2009, www.galiya.kz) we have reported the words of Galiya Kerey: Trees, as well as all the other Nature, will undergo considerable changes; trees also have got different energy, «breath» of different planets. The sample of the tree needful to humans is the evergreen spruce. The fruit-trees, spruces, oaks will remain and also some other trees which will mutate. The vegetable world of Kazakhstan is being healed. About ten new species of trees and shrubs will appear».

In the article «The Age of Aquarius or collapse of the old world», which has been reprinted by some foreign sites (oko-planet.su & vseneprostotak.ru), we have published the information about blossoming of apple-trees, lilacs, cherry-trees and other trees in different regions of Kazakhstan in August-November last year. In that time the majority of the scientists called such a phenomenon as a natural anomaly. «This is not an anomaly – says Galiya Kerey – These are the evident signs of approaching a new climate. Clover, spurge, chicory, dandelions and others began to blossom in Almaty in November (!). The buds of the apple-trees, cherry-trees, chestnuts, poplars, hawthorns, lilacs, dog roses and others were swelling. As in the animal world, some part of the trees will disappear: maples, birches, elms, pine-trees, firs and other ones. Fruit-trees, oaks, cedars, spruces, lilacs, chest-nuts and some others will remain» (15/11/2010, www.galiya.kz). 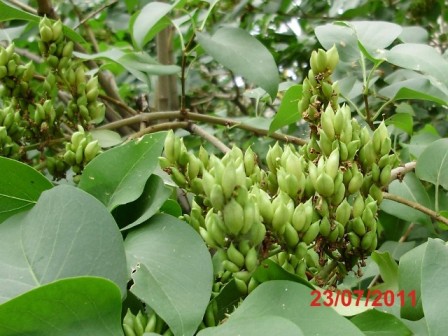 And now the fruits of the activities of the Supreme Powers and the bio-energy specialist Kerey can be seen by townspeople in the truest sense of the word: Lilac has begun to bear fruit!

We will be witnesses of appearance of a new edible fruit, unknown up to now – small marvels of global climate change.

Galiya Kerey comments this phenomenon: «This is the result of many factors, first of all of the rebirth of the primordial climate of the eternal spring due to purifying and regenerating the soil, purifying the water, pure rains, saving from insects and birds, etc. Probably many people have noticed that nowadays fruit and vegetables are without wormholes, they are preserved much better, and they have got better taste. Several years ago we published the information about the future change of lilac.

The lilac blossomed in November of the last year was one of the signs of such alteration, renewal, or rebirth of the lilac. But in the last autumn the lilac shrubs were blossoming not everywhere and also now they do not bear fruit everywhere, but only in those places where the rebirth activities have been completed. Certainly, it is hard to believe that primordially the lilacs were bearing fruit but at some time they lost own property because of negative changes of the life on Earth. The same thing concerns also many other plants. For instance, in the future a rose won’t have thorns, and will be flowering all the year round, and the tea with petals will have medicinal properties.

Therefore, changing the surrounding landscape, in the course of time, will be more noticeable phenomenon. As concerns the fruit of lilac, they will ripen in September and you can eat them as nuts – yes, they are not only edible but also salubrious. It is needless to say that the lilacs cut off by people for «flowers» won’t bear fruit – people should treat them with care».