Milestone event as the beginning of the end 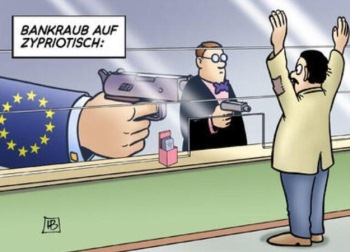 This year, in the middle of March, in the small island state of Cyprus there was an event that came close to bringing down the banking system of the European Union. This is milestone event as the beginning of the end of the European currency. Even on the verge of collapse, on March 15, both Cyprian banks Laiki Bank and Bank of Cyprus were financiering in the ordinary and usual course. The situation was made worse when the Eurozone Finance Ministers suddenly declared the two major banks in Cyprus to be problem. For the first time banks became bankrupts not because of criminal or short-sighted policy of bankers, but on the decision «from above». It is unprecedented experience – to put an end to bank deposit guarantee! It was the first time that deposits became uninsured in Europe and it will cause a cascade of bankruptcies. Indeed, alarm has sunk deep into the mind of people and will compel them to withdraw or convert the funds into other currencies or transfer them to other countries.

As a result the Bank of Cyprus’ depositors, holding more than 100 thousand euros in their accounts (128 thousand dollars), risk losing up to 60% of their savings within the Cyprus’s debt restructuring plan approved by the European Union and the International Monetary Fund (IMF). At the same time, depositors of the country’s second-largest bank, Laiki Bank, may lose as much as 80%. It looks very much like a normal expropriation of rich clients’ money, the more so because among them there are a lot of foreigners, especially from Russia, whose citizens can lose about 2 billion dollars. As a whole this operation can «bring» to Cyprus up to 10 billion euro.

Nowadays the debt load of Greece, Spain, Italy and other countries has grown to such an extent that it calls into question the continued existence of the euro currency. As they say, just started living well, money came to an end. The time is ripe for debt settlement but who will pay? After all the states debtors aren’t able to pay off, so they pull others in the whirlpool of default. They have found the «easy» way out – to force bank customers to pay accounts of others: that’s your offshore zone for «doubtful» money. They have chosen needed clients – individuals, small enterprises. To take away their money and close the credit gaps with it.

Here are the comments of Galiya Kerey on the future of EU and CU: «Being prepared within 50 years and founded on the apparently democratic principles, nowadays the European Union as an integration project shows the real signs of disintegration whereof we wrote three years ago. The European Union can’t be compared to the Soviet Union. The lack of unity in all the spheres, including policy, is peculiar to the EU countries. There is no connection between them, there is no a mechanism for connecting them in one organism. It is ill-matched European «tower of Babel» with 23 official languages, composed of donors and outsiders, the rich and the poor, «Right» и «Left» that now do not understand each other in literal and figurative sense. The population of Europe does not want to live in common house any more. This union defers only to ruling forces’ aspirations: Germany has usurped the power, Great Britain is going to leave the EU and France has launched its military intervention in Mali. The EU rich states have become richer, but poor ones – even poorer. The EU leaders are not interested in raising living standards of the EU population. On the contrary, they want to solve their problems by stringent austerity measures that reduce the European living standards even more. All of this gives rise to never-ending strikes, meetings, «street fights», social discontent, even in the rich EU countries.

The true reasons of integration collapse are «shadow values» of modern civilization which are not advertized, but they are determinant. And, eventually, they will destroy not only these unions and confederations, but also their components, such as idle banking system with loan percent, exchange speculation, the western psychology of «easy life», corruption, bribery, immorality, «the law of the jungle», law of total dependence on the strong, etc.