Two unprecedented events in the history of the world occurred in 2010: oil spill in the Gulf of Mexico and wildfires in Central Russia. Both events shock not only by scale of environmental disaster, human losses, economic damage and consequences, but also by obscure, sometimes mystical, phenomena that accompanied these catastrophes. These disasters have riveted the world community’s attention: their consequences will have a detrimental effect on the ecology and economy not only of the two States but, to a greater or lesser extent, of many countries around the world.

However, few people could assume a close connection between these disasters in different parts of the world, because mankind in its development drew seldom the correct conclusions from natural, man made or social disasters. The nuclear accident at the Chernobyl Nuclear Power Plant has not stopped development of nuclear power industry, construction of new nuclear power plants, not to mention full withdrawal and destruction of nuclear weapons in the wake of the horrors of Hiroshima and Nagasaki. Without having studied man made activities for cosmic ecosystem, mankind continues to “domesticate” space up to bombing of the Moon, in spite of numerous accidents, space debris, human losses and pollution of environment.

If a person to some extent reacts to one sign of destiny or another, mankind does not pay attention to numerous accidents and disasters and continues to move along the disastrous trajectory. The most striking thing is that even with this oil «Chernobyl» the United States Courts sided with oil workers against the Obama administration’s decision to ban deep-sea drilling! And the British Petroleum group does not exclude that in the future will continue to work on drilling in the Gulf of Mexico. As if they don’t assume other scenarios, for example, annual hurricanes in the States on the seaboard, which, fortunately, this year are weak. Now hurricanes can easily transform into oil typhoons and go for a walk around the cost in the form of firestorm.

Despite all kinds of crashes of military aircrafts, missiles and submarines, has Russia scaled back its military and space program, production and advancement of military technology, launches of spacecraft? No, they pay the tribute to the memory of those who died as heroes and set to do a new “Kursk” or “Bulava”.

Firestorm … above the Lake In 2010, for two weeks, Russia became a home of fire and smoke. The forest fires swept through 20 regions from Chukotka to Smolensk with a total area of 0.86 million ha and a death toll more than 50 people. According to the Russian Federation Ministry of Regional Development report dated August 6, 2010, as many as 1945 burnt homes in at least 127 villages are to be restored. The fire drew near the strategic sites as nuclear research centers in Sarov in the Nizhny Novgorod oblast and in Snezhinsk in the region of Cheliybinsk as well as the military command of the Russian missile attack warning centre in the Moscow region, and destroyed the Russian Navy base near Moscow. The damage caused by forest fires is estimated at 15 billion dollars and as a result, the Russia economy slowdown and growth rate reduction at 1% of GDP is expected.

According to the head of the state weather service RosGidroMet Alexander Frolov, there was no anything like this sort of heat in Central Russia during the last 1000 years! It appears to be the worst drought in 130 years of meteorological observations. Sad figures «hit records» in Moscow: the heat and smoke doubled the city’s death rate.

A total of 240.000 people as well as more than 25.000 units of equipment, of which 226 aircraft, were involved in efforts to stave off the forest and peat fires, said Sergei Shaposhnikov, the Emergency Ministry’s civil defense department head. Due to strong winds in some areas, fires can quickly become crown fire storms flying through the tops of the trees. “This is a truly difficult situation. This year is characterized by outbreaks of fire storms, a phenomenon not observed in previous such cases – in 1972, 1981 and 2002,”said Shaposhnikov. There is a certain apocalyptic thing in eyewitness accounts: villages burned down within minutes and it was as if the fire fell from the sky. The highest level of wildfire hazard was announced in some regions: dried out even non-inflammable forests and there were no obstacles in the form of damp forest areas.

And it turned out that even rivers and lakes are not a hindrance to fiery tornadoes. The head of Emergency Situations Ministry mentioned that most firestorms spread very quickly. Thus, in the Nizhny Novgorod region the firestorm travel time reached 100 meters per minute (!). In six hours we had the fire area about 82 thousand hectares. Firestorm jumped over a 250-meter lake like a puddle, said Sergei Shoigu.

By the way, such disastrous fire tornadoes through vast areas are phenomena that hardly ever occur even in the hottest countries of Africa and Asia. 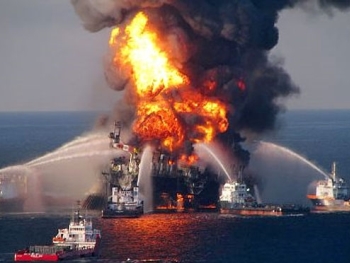 One of the leading oil companies in the world, the British Petroleum with its advanced technology for deep seabed drilling of oil is suffering a defeat not in combating business rivals but in its desire to penetrate deep into the ocean and «bite» into the womb of the Earth. After all, area of the seabed and the ocean floor – terra incognita – an unknown land. Even in the twenty-first century the Ocean opened only a small quantity of its secrets. For example, crystal pyramids were found at the bottom of the Bermuda triangle and what’s up with that?

As you know, the newest Deepwater Horizon oil-drilling rig sank on April 22 in the Gulf of Mexico about 80 km off the Louisiana coast after a 36-hour fire resulted from the powerful explosion which cut off 11 men working on the platform. BP was drilling an exploratory well there. High pressure methane gas from the well expanded into the drilling riser and was released onto the drilling rig. It was not noticed at once. In addition, the safety system failed to function for reasons undefined. As a result, the uncontrolled fire burst into a blaze, the flames mounted up to 150-200 m and it was visible at a distance of 60 km.

The American authorities announced that in consequence of the exploratory well accident about 4.9 million barrels or approximately 779,000 tons of crude oil could flow into the Gulf of Mexico! It is the largest oil spill in human history which happened through fault of one of the most reliable companies in the world, off-shore of the most powerful country with the most stringent environmental requirements!

The company made already several attempts to stop the oil flowing. The August attempt was recognized successful. Nearly 40.000 personnel and volunteers as well as 5.000 vessels and 110 aircraft were involved in the oil spill cleanup activities. In 2010, a second-quarter net loss of BP was a record for the first time in the corporate history of Britain and amounted to $17.2 billion. BP reported that its own expenditures on rectifying the consequences of the accident in the Gulf of Mexico reached $ 6.1 billion. The company plans to sell its assets for an overall amount of $ 30 billion in order to finance the accident management. The BP total expenditures from the oil disaster could amount to $ 32 billion. From the date of the accident at the oil well BP has already lost 40% of market capitalization.

The “explosion” of oil giant BP was accompanied by warning signs. On July 18, 2010, a new oil spill was found out about three kilometers from the damaged well. Layer of oily sediment was revealed on the bottom of the seafloor and it was supposedly not associated with damaged well and could have a “natural” origin. Furthermore, on July 27, a tugboat collided with one of the wells and this crash caused a new oil spill in the Gulf of Mexico. 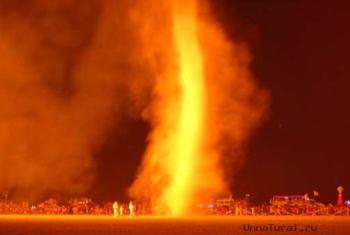 We are witnessing global climate change, whose causes are explained by bio-energy specialist Galiya Kerey: “The Earth faced several global disasters, Floods, purifications in order to establish a new just model of life. However, every time mankind and the nature reached an impasse: past epochs’ negative «breathing» found a loophole and enlarged its activities in the new life. The whole continents were fading into nothingness, the oceans appearing, the Earth’s covers changing, new peoples coming. And during such epochs’ changes people, animals, continents, oceans, oil, forests, etc. were playing their parts, having their own predestinations, having influence from different planets. Mars and Saturn’s impact is negative; the Moon and Jupiter’s influence is positive. Nowadays a new Lunar Era is coming, so the purification is occurring, where people are able to play both the positive and the negative part”.

Galiya Kazhgaliyevna Kerey about the nature of the oil spill in the Gulf of Mexico and the wildfires in Russia: “a new era carries eliminating the needless forms of life, changing and renewing the rest ones. Water, oil, soil, flora, fauna, etc. are regenerating now. In particular rivers, seas, oceans “old” water is going away, causing the exodus of many river and sea inhabitants, the drying-up of seas and rivers; and the sea level is not changing, despite the enormous glaciers melting. In a past life the paths of fire and oil were covered with water, salt, so it is not allowed to drill under seas and oceans. I wrote about this in 2002, in newspaper articles, at this website, the Book of the Moon about New Model of Life “(Almaty, 2004): there is a lot of information about the danger of oil development in the Caspian Sea shelf. And the Gulf of Mexico is a path of “old” oil coming from the land of Mars to the Earth (in the United States of America – there is impact of Mars, “land of Mars”). BP opened the oil and fire paths by its drilling there. For that reason the explosion on a drilling platform occurred and a huge amount of the oil flowed into the Gulf of Mexico. The Earth is a single organism. When BP attempted to cap the wellhead with the cement solution then the fire paths opened in Russia, in part in the Western Kazakhstan. This is why unprecedented fiery disaster, beyond the control of man, happened suddenly in Russia, whose causes can not be explained by scientists. But it is not given to BP to close the oil (and fire) paths in the Gulf of Mexico; and a tsunami will throw out the oil and fire with a new disaster for the USA. The name of the oil company will fade away”.