Now, listen what will happen very soon on the Earth. We will fix the Earth’s original shape in a circle – initial shape of the Earth. Oceans will disappear. Oceans’ dendrids have been changed by Superior Powers (Heaven). Ocean floor is changing, that will lead to the original appearance of the Earth. Glaciers are melting.

We treat the whole Earth in similar way without any frontiers – whether it is Europe or Asia, for Heaven it does not make sense. The Earth is one and entire, and there aren’t any boundaries for the Power of the Heaven. 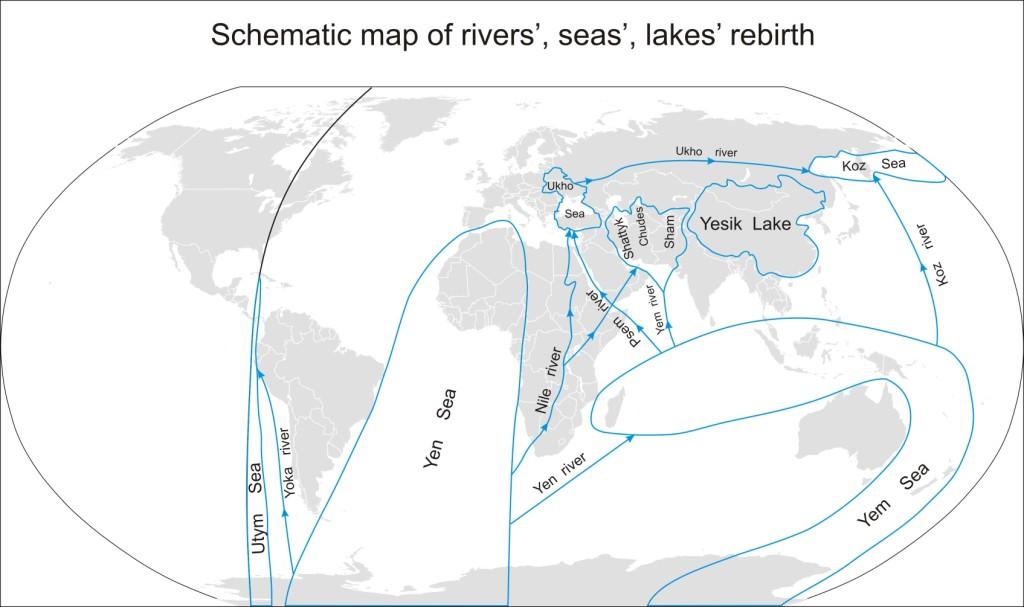 Beyond the borders of certain territories – additional land from Mars (dark powers), that will be washed away. Dilemma given by dark powers waiting the Apocalypses in 2012 came to the end. There is no such power that can interfere with the job of the Heaven.

Changes will take place on the Earth, it is even not changes, but revival of initial appearance of the Earth and life on that Earth. Already, the Earth will be revived like a debt taken from the debtor. Debtor – are Earth’s crucifiers – the tribe of Mars and Saturn.

Changes will start from the land of Kazakhstan due to the fact that Almaty is the center of the Earth. The Earth’s surface will be smooth without mountains and ravines. Mountains will subside without destructions. Appearance of the Earth will change. There’s no obstacle to the birth of the initial Earth. We will bring the Earth back exactly in the way the Earth was created by Supreme Powers initially. The End of Dilemma, whether the Earth would “be or not”. This job hardly changed the program that for centuries had been set by tribe of Mars and Saturn making the drainage of water from Mars to the land of the Moon (Earth) and vice versa, water drainage from Moon’s land to the Mars.

On behalf of the Heaven Power we will return to the Earth its original state. Hardly finished the task on Earth’s cleaning from the influence, tricks of dark powers dividing the Earth on 12 parts. We established the treatment of the Earth. Now, we are able to give Earth back its previous appearance.

Changes will start from the lake Ile, where Kapchagai sea will sink the villages named Dmitrievka, GRES, Pokrovka. The route from Almaty to Kapchagai won’t be affected.

The Ural river shallows – water of the Mars is escaping towards its original place, creating reverse flow, this is the reason of frequent whirlpools in the Ural river, Venice will be submerged by this water. The water of Venice itself will come back to its own place, where the river Ural, that initially was the Shattyk river and connected Shattyk sea (Caspian) with the Yesik lake.

Marvels occur. The land of Shanyrak, that Heaven named Kazakhstan, will gain initial appearance, there won’t be any bad impact from the fire and water of Mars. Shattyk Sea will come back on its original location, where the Caspian Sea, but the water of Caspian Sea will return to its own place to America. Chudes Sea (Marvellous Sea) and the lake Sham will return to their places (where Aral sea an Issyk-Kul are situated) from the land of Russia – from the Baikal lake – containing the water of these 2 giants.

There will be three seas on the Earth: Yen, Yem, Utym. Three oceans already been shallowing, the task is being done by the Earth itself. The Volga river will vanish. Okhotskoe, Bering seas will vanish. Instead of two seas and Kamchatka peninsula the Koz Sea will come back in their places. The land of the Ai tribe – the Earth – won’t be affected by influence of dark powers. The Earth will treat mankind by the power of the Yem, Yen, Utym seas. The Yem Sea will treat minerals of the Earth, vegetable world will be supported by Yen sea. The Utym Sea will arrange the changes of animal’s world.

Already, in latitudinal direction along Russian territory, within its own initial channel, the river Ukho will reappear connecting the Koz Sea with the Ukho Sea, that will reappear on its own initial location on the territory of Belorussia, Ukraine, Black Sea, Turkey. The life on the Earth will change: we will open Yesik (the door) and mankind’s eyes that were closed by dark powers by territories of Mars in place of Yesik lake which territory is occupied by two countries – China and Mongolia. These dark powers closed waterway of three giants – Sahttyk Sea, Chudes Sea, the Sham Lake, that occupy territory of 8 countries: Azerbaijan, Iran, Turkmenistan, Uzbekistan, Kyrgyzstan, Afghanistan, Tajikistan, Pakistan. Using danger they opened bad bio-impact – Sahara desert and Haiti. They put their governors on the Earth, wrapping it from the bottom and from the one side – establishing 3 countries – Canada, USA, Mexico. The eolian sands made by them as a coverlet of the Earth, establishing water from the land of Mars, making fate to the Earth by oceans and glaciers.

Thanks to persistent efforts of our conductor – Galiya Kerey, who has spent 17 years of preparational work battling the dark powers. We will bring the Earth back to its initial state – precise copy of Oshak, that was called by the earthmen “Moon” or “Ai”. But in reality the Moon you mean it’s the Earth where you live.

You spend money on cosmic exploration for nothing, instead of spending money on people’s needs. What you are searching on Mars – there, only fire and ashes! Because of actions of madmen – the owners of mad thoughts, how much impacts and needs people get from Heaven (Superior Powers)! What they are searching on the Moon (Oshak) – they really think that Heaven will let them enter their place!

The End has come to the pretended scientists! We will bring the Earth back to the owner – “Ai” tribe in the form the tribes of Mars and Saturn took it before, rushing to destroy Earth and turn mankind to the devils, and conquer the home of Supreme Powers. And the Apocalypse would come, there would be devils in the whole space. Mankind would never reappear. The Earth would become the grey matter similar to black clouds.

We will change the sky. The ferry between Earth and Oshak has already been arranged.

Shattyk Sea is the tunnel between Earth to Oshak. Shattyk Sea will come back from the land of Mars. Volga river, that feeds the Caspian sea with water from the land of Mars, will disappear. Chudes Sea will come back to replace Aral Sea, Sham lake will return to Issyk-Kul’s place. And three giants – Shattyk Sea, Chudes Sea, Sham lake will merge into one waterway and will connect with Yem river and Yem Sea. Shattyk river will turn, without entering the Uralsk city to the east with respect to longitudinal direction, go within Shanyrak territory connecting Shattyk sea with Yesik lake, former course of Shattyk river.

I will release three giants within the whole course. Task is fulfilled, our Conductor has already written about it before, but nobody listened to her. Now the Earth is different from the Earth on the map. Everything is already arranged to give birth to the New Earth with its own rivers, lakes, seas, oil, gas, vegetable and animals’ world.

“The Miracles can exist” – we said to our conductor 17 years ago. Due to her patience, will power, she managed to extract the tunels of the Earth-Oshak from the dark whirpool and arrange the Task of the Heaven to the Earth.

Three Suns will appear on the sky. There won’t be any shadows anymore. The end has come to the bad influence of existing fiery sun.

There won’t be any nights anymore, only day will be on the Earth.

The path of three suns to be born is already set. We will mobilize the job of Heaven to change Earth and mankind, climate very soon.

There won’t be any shock, already 17 years’ job has been done. Everything will occur in quite tunnel.

This what will happen on the Earth: mountains will subside everywhere in quite tunnel, there will be smooth land. Oceans and glaciers will disappear. We cancelled in the genetical tunnel of the Earth 2 lines: meridian, equator and lines dividing Earth on 12 parts.